Introduction to the Hindi Language

Hindi is the national language of India; but, it is one of several languages spoken in different parts of the sub-continent.  ‘National’ should be understood as meaning the ‘official’ or ‘link’ language.  The homeland of Hindi is in the North of India, but it is studied, taught, spoken and understood widely throughout the sub-continent, whether as mother tongue or as a second or a third language.

Hindi has a special relationship with Urdu: their grammar is virtually identical, and they have a substantial vocabulary in common. However, the two languages part company at a higher level, because Urdu draws the bulk of its vocabulary from Persian and Arabic, while Hindi draws much of its vocabulary from Sanskrit.  Besides, Hindi is written in Devnagari script, while Urdu is written in a modified form of the Arabic script.

Hindi has many different styles and speech registers, appropriate in different contexts. At the most colloquial level it reflects more the common ground with Urdu, while in formal and official contexts a more Sanskritized style is found.

The language of this course is that which is used unselfconciously by Hindi speakers and writers in the various, mainly informal situations, which are introduced. We have included some of the English language words here, which are freely used in conversations by the Hindi speakers.

Hindi is written in Devnagari or ‘Nagari’ script.  The script is phonetic; so that Hindi, unlike English, is pronounced as it is written. Therefore, it is to learn the characters of the script and the sounds of the language at the same time.

Each Devnagari character is followed by its Roman transliteration. The transliteration shows each consonant to end in ‘a’ : this is because in the absence of any other vowel sign, the Devnagari consonant is followed by an inherent ‘a’ sound (pronounced like the ‘a’ in ‘majority’), unless it occurs at the end of the word, when it is not pronouced, or is silenced. Thus each Devnagari character represents a syllable, and the totality is strictly speaking a ‘syllabary’ rather than an ‘alphabet’. Note that Devnagari has no capital letters.

There are two features in Hindi characters that require special attention (as these do not occur in English): first is the  contrast between aspirated and non-aspirated consonants, and the second is that between dental and retroflex consonants.

Aspirated consonants are those produced with an audible expulsion of breath and non-aspirated are pronounced with minimal breath.  Hindi distinguishes unaspirated ‘ka’ and ‘ta’ from aspirated ‘kha’ and ‘tha’.

Second contrast is between dental and retroflex consonants, for example, ta and da from t. and d.  In dental consonants the tongue touches the upper front teeth, whereas with the retroflex consonants the tip of the tongue is curled upwards against the palate, and when the tongue is released from this position it gives the Indian retroflex sound.  The nearest  approximations in English to these distinctions are the dental-like ‘t’ which is sometime heard in the pronunciation of the word  ‘eighth’, and the retroflex-like ‘t’ in ‘true’ and the dental-like ‘d’ in ‘breadth’, and the retroflex-like ‘d’ in ‘drum’.

There are 33 consonants and 11 vowels in Hindi.  Additionally, there are also many conjunct consonants. Hindi consonants are divided into groups on the basis of phonetic properties of their formations: plosives, nasals, fricatives, flapped and tapped sounds, and semi vowels.

The customary Hindu greetings are ‘namaste’ or ‘namaskar’, often said with hands folded in front of the chest. These are all-purpose greetings, covering the English ‘hello’, ‘Good morning’, ‘Goodbye’, etc.

Though one wouldn’t say ‘namastay’ as frequently or casually as English speaker would say ‘Hi’ and/or ‘Hello’.

The word ‘jii’ can always be added to a man’s surname, where it approximates to ‘Mr.’-though its tone is rather more cordial; ‘sahab’ has similar usage.  ‘Jii’ and ‘sahab’ can also be used after the first or given names of both men and women, or alone, approximating in sense to ‘sir’ though ‘jii’ is less formal.

‘Bhai’ is literally ‘brother’,  and is commonly used between males of roughly same status.  The same pattern of use applies with ‘bahin’ ‘sister’ among females.

There are three pronouns for second person in Hindi which relate to the hierarchy in social standings of people.  The grammatically singular pronoun ‘tu’ is used in situations of intimacy on the one hand and contempt on the other. It is not likely that the learner will need to use it.  The two pronouns that require greatest sensitivity in usage are ‘aap’ and ‘tum’, both grammatically plural pronouns meaning ‘you’.  ‘Tum’ is familiar pronoun, used between close friends, members of family, and to people of clearly lower status.  ‘Aap ’ is the formal, polite pronoun used to equals and people entitled to respect on account of age, seniority and social standing.  It is safest to use ‘aap’.

The expression ‘kya haal hai’ means literally ‘what is (your) condition?’ and is used in the sense ‘how are you generally?’;  it is a useful idiomatic expression, very common in conversation.  ‘Meharbaanii hai’ means ‘it is (your) kindness’, i. e. ‘thank you’.  However, there are two words in Hindi which translate ‘thank you’: ‘shukriyaa’ and ‘dhanyavaad’.  These terms tend to be reserved for occasions of real obligation, but increasingly they are being used along the lines of English ‘thank you’.

The adjective ‘achchaa’ ‘good’ is used in speech with a wide range of meanings depending on the tone and stress with which it is pronounced. Its range covers ‘Good!’, ‘Right then!’, ‘Ah!’, ‘I see!”, ‘Really!’, and so on.

Hindi nouns are either masculine or feminine.  The grammatical gender of each noun must therefore be learned. There is no definite article ‘the’ in Hindi.

Masculine nouns are of two types: those ending in a final aa in the singular which changes to ‘e’ in the plural, and all others, which are the same in singular and plural:

Feminine nouns are also of two types:  those ending in ii or iya in the singular which form their plural in iyaan, and all others, which add en in the plural.

Adjectives agree with the nouns they qualify.  Hindi adjectives are of two types: those that inflect (change their endings), and those that are invariable.  Those which inflect, such as ‘baraa’ ‘big’, and ‘chota’ ‘small’, end in aa in the masculine singular, e in masculine plural and ii in the feminine singular and plural.   The invariable adjectives, like ‘saaf’ ‘clean’, never change.

Hindi uses a different word order than English. The subject usually comes at the begining of the sentence, and the verb comes at the end. The negative ‘nahiin’ comes just before the verb.

In English, prepositions such as in , from, etc. precede the words to which they relate. In Hindi , such words are called postpositions, because they follow the words they govern. In Hindi, there are five simple postpositions.  These are:  men (in), par (on), tak (upto, as far as, until); se (from, with, by);  and ko which like se is used in a variety of senses.

The Hindi noun has two grammatical cases: the direct and the oblique.  Nouns become oblique when they are followed by postpositions.

Masculine nouns form the oblique before postpositions as follows:

The Hindi verb is usually quoted in the infinitive form, e. g. bolnaa ‘to speak’.  This form consists of the stem bol- plus the infinitive ending naa.

The verb must agree with its subject in both number and gender. If the subject is a pronoun, the gender will be that of the noun to which the pronoun refers.  The verbal forms and their pronouns are given below: 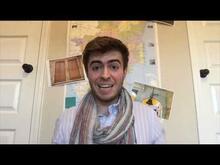 Daniel Bacheschi on the Hindi Program 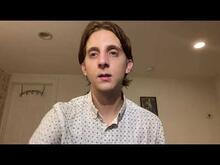 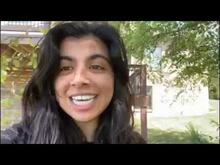